OK the deadline is tomorrow (April 15th) to get clips in.

So far I've had very little response. So I'm going to make it simpler. Now I just need either an inspirational quote or a funny cos it's true quote as those seem to have been the most responded to (and by most I mean three).

I'll extend the deadline to this sunday night (April 19th).

Please try and get something to me by then if you want to and can.

An open letter to all the women of the ark

Ladies! I find it morally, if not viscerally, repugnant the bodacious representation of womanhood being displayed on this site. The truculent, or more to the point, acerbic yowling from the weaker sex on here reviles modern societies basic expectations of subservience of those who would be your better. If I were to be adviser to your men, reverberations off your firm, young, pink buttock's would be the whale song of the neighborhood. It saddens me to know that perky, tone breast reside on those… Continue

I'm not a planner. Summer arrives and I find myself filling the time off from school with professional development opportunities. Last summer, for the first time, I planned nothing and decided to have the summer to myself but that just went nowhere because I wound up with a lot of unstructured time and that meant very little focus on anything productive or even FUN!

So this time, I'm not only taking those summer months to focus on the… Continue

I facilitate a gay youth group every Friday night. The kids come and chill and we try and have some creative, fun things for them to do. One of my fellow facilitators is a champion slam poet. She recently represented the State of New Mexico in a Slam competition. Needless to say, she has street cred.
Last night she conducted a poetry workshop. She handed out these forms to each of us, kids and facilitators alike, and told us that we have 20mins to fill it out. I had some trepidation… Continue

I am basking in your awesomeness

I get a lot of really cool comments on my blogs. Thank you all, accept MOTC 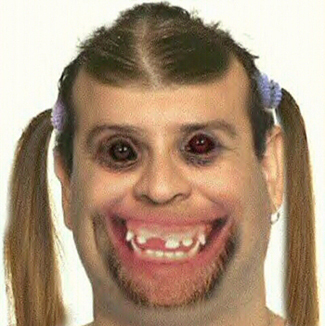 I was browsing my old, I mean old (LOL-maybe 2 years old) videos in LV and YT and ARGH!
how ugly I was looking with my guitar.. singing..and vlogging (with my broken English)
what a big shame!
..wait, still ugly now BUT I think I look like a monster way back ( see the photo above? More like that! LMAO!)..
have you seen yours way back..how you look like?
maybe not but me..Freakin'-A!
Looking back now at myself in… Continue

Commie chicks are hot, and put out like freaks.

Go on you trucqulent, acerbic coo-lade drinkers. Have your large coffee, but don't forget to call it a Venti. You can have your organic apples as long as 9 year old Jesus can climb over the fence. I would rather stay on the fringe than lick the boot of you Hight Definition cosmopolite people of the world. Does the Che Guevara's tee shirt come in XXL?

What is the sluttiest underwear you own and what is the story behind them? Mine are the ones I stole from the laundry basket when the women was not looking. Granny panties make me feel like I have a secrete all to myself.

To anyone who owns a mac, do you have any recommendations of what kind digital camera is good to use and compatible with iMovie?

I need a small camera that can take still shots and decent video and isn't the most expensive thing in the world.

I'm posting this blog in case something bad happens.

I'm posting this because I am concerned that the couple who help my Mother and me might harm us, and we have nobody to help us that lives nearby.

Has anyone had help in your home for things like cooking, cleaning, or various other tasks, but the people helping you make you uncomfortable, or they take advantage of you?
This is the case with a couple who helps my Mother and me.
They borrow money BESIDES what we pay them, and don't pay it back. They use my Mother's car, (with… Continue

Instant invisibility in public. No one speaks, looks at you, smiles or dares to interrupt.

I used to watch "Friends" and wonder two things. Why does nobody in NYC lock there doors and who practically lives in a coffee shop?

I think I understand the latter a bit more now. Since coming out to the Midwest farmland of America there's not a lot to do. Except drink. And seeing as it wouldn't be appropriate to turn up to work with the kids of America (woah-oh) in a less than sober state coffee is the beverage of choice.

Peoples who's throat I would rip out, and why.

As a Vampire, I have eclectic tastes.
Kat Ballou would taste like domestic beer. I would probable have her blood running down my cheeks, as I call Xfashionfacist at 3 AM crying for one more chance to slurp upon her black liquorish hemoglobin. Anotherbrianne would be satisfying , but I would get hungry again in an hour. I'll keep her chained in my basement. I would feast upon MOTC in the closet, but then never talk about it again. Blanchenoe, Sedona Leigh, and Nobodyshild99 would be my… Continue

I highly recommend this show. It is so clever and so funny. Do not take the kids though. It is definitely R rated.

I never thought this would happen again. I mean, it's one thing when you're a kid..you can go through a package of Oreos and walk it off, but not when you've reached Ye Olde Fahrtdom, as I have!

I hadn't eaten one in years. Those wonderful cookies in all their creamy centered, pull-apart, milk-dunking, perfect roundness with ridges, delightfulness. But then recently I discovered, Newman-O's! An organic Oreo! No more guilt that I'm destroying my personal ozone layer… Continue