S.A. Murray left a comment on my "Brush With Dizzy" blog asking if I had a photo of myself with Dizzy Gillespie from our meeting many moons ago and sadly, I don't have one. Cameras were not aloud in the auditorium where he was performing. This made me think of many other lost photo ops throughout my long strange trip of life so far, and a couple that were not lost.
,...and now for some… Continue

Join in and pass this website into on: http://www.newrealitytransmission.com/

Introducing The End Of Money Project

In this era of foreclosures, layoffs and debt, it is time for us to ask, "Why must we pay to live on the planet we're born on?" I am starting a global movement to get people to ask that question. I have a video introducing my plans to do a documentary and book on the subject, but as it has a fundraising pitch at the end, I didn't put it on this site. But it is uploaded on VIMEO at
http://vimeo.com/16299789 and all of you are welcome to view it and… Continue

another collection of writings i put up on facebook when i feel the need to write :D if you would like to add me on FB search for Faheem Riasat and my ugly mug should appear hahaaa.

1. If you could have any thing in this world what would it be, do you pray for world peace or cures for disease, or are you like me wanting to find the courage to say i wish it was just you and me, can you honestly hold on to the moment you love and make it last for an eternity, or let it fly away… Continue

My Brush With Dizzy

In the year 1983 when I was 18 years old, I was fortunate to get to see Dizzy Gillespie play in a small auditorium on the campus of South East Missouri University. He played from the soul brilliantly, as he always did, and the back up musicians were phenomenal as well. I loved the way he seemed to go out of his way to feature the other musicians and I will never forget the way the audience members were singing along, not with their voices but with slight undulations of their bodies and blissful… Continue

Troops Discharged for Being Gay, Re-Enlist

SAN DIEGO -- At least three servicemembers discharged for being gay have begun the process to re-enlist after the Pentagon directed the military to accept openly gay recruits for the first time in the nation's history.

The top-level guidance issued to recruiting commands Tuesday marked a significant change in an institution long resistant and sometimes hostile to gays.

Must be a Perfect.

Another Dear Friend Missed 'Round These Parts

This was just what I needed this morning. It goes great with coffee *snicker*,...oKAY, cover your keyboard with a waterproof tarp first * devil on left shoulder pouts while angel on right looks all haughty *.
If the embed doesn't work, copy this into your browser or click link :…
Continue

If you had a million dollars....

On Sunday October 10th, I watched the CBS Morning Show about Julian Lennon. It's inspiring to see his perspective and how he has coped and moved on.

The saddest part about the interview I saw (3:45) was how Julian has to now try to find his father's belongings through auctions and has to buy them back along with his childhood. I find that such a shame.

Hey gang. I'm Scott. Newbie here. Some of you already know me and I'm sure I'll be getting around to screening the rest of you.

Yes, the ones that haven't been cracked yet :P

what big ears you have grandma...

The better to hear you with, my child...

I wish it was that easy.

This morning I was running late, and when I went outside to get in the car, there was this guy kinda hiding behind my dumpster. He ducked down and when I got in my car and backed out and then headed to leave, right before I turned out, he opened the dumpster and got inside and started opening trashbags... I got to watch because I was stuck trying to get out.. traffic was bad at that time... I hate running… Continue

Cleanup is underway after an aluminium plant's reservoir collapsed.

THE GIST
An aluminum plant's industrial waste has spilled through seven villages.
The mud is slightly radioactive and highly corrosive. It also contains toxic heavy metals.
Two adults and two children were killed. 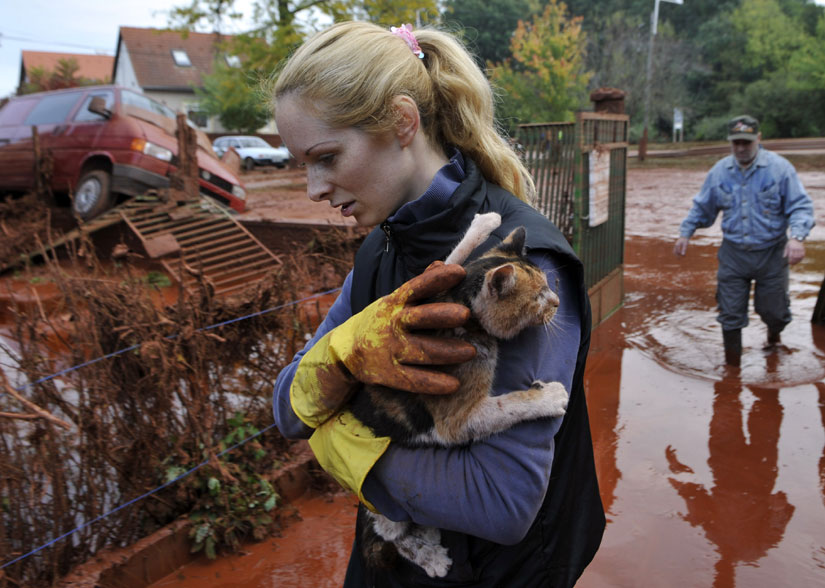 Locals in Devecser, Hungary, are salvaging what they can after an aluminium plant's toxic waste reservoir collapsed, killing… Continue

My husband wants to buy me a new digital video camera and I really need one. My old analog Sony is finally, after 15 years, sputtering out. I always hate to retire old equipment because the saying,
" They don't make 'em like they used to. ", is so very true.
I need something that is very Mac friendly. I don't want to have to buy more software or hardware to use it. I want to be able to plug it in and import directly into imovie without having to convert and de-interlace before… Continue

Tomorrow is the big day, for around 8 am I go pick up Mr.Kitten from the Vet and bring him back home to live with me.

Mr. Kitten was found last week crying outside, all skinny and scrawny, full of fleas and worms…. About 6 weeks old, gray tabby with white patches.

I have been thinking for a while about getting another cat, a companion for Dinah… I feel really bad when I have to leave for the weekend and she is home alone. She is still in her playful stage and I am really… Continue