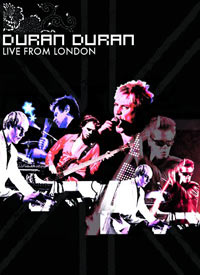 I got hold of this DVD (a 2004 reunion concert) and was watching it last night..
Man, as the band started playing "Hungry Like A Wolf",
BAM!!..I felt I was catapulted back to 1985..
the hair..the dress...the shoes..the attitude..
youthfulness full of fun and adventure....F^*K! it was GREAT!
then the band played "The Chaffeur"..
ahh..goosebumps I had all over..
and what the F?..my eyes had tears in 'em..tears of joy?
oh, never felt good like this in ages..
Duran Duran? Whahaha!
yes, they were huge..in the 80's..
I used to copy Nick Rhodes hairstyles...
(remember this hair gel named New Wave by Wella?LOL)
used them a lot to make my hair stand on one side and go down on the other side LOL..
and yeah, John Taylor..my idol for dressing up smartly among the five of them..
man, I remember too that I used to sing along to this track "New Moon On Monday" like crazy..
"..shake up the picture, the lizard mixture with your dance on the eventide!..."
the sound they produced then was so awesome for me , those John Taylor basslines, Nick Rhodes keyboard sounds, Andy Taylor guitars licks, Roger Taylor drumbeats and Simon Lebon's wailings were pure MAGIC to my 14 year old ears!
yes, they were big in the 80's..HUGE indeed for those of you who were not yet born then, or havent heard of them LOL
well..I just thought you guys and gals who were teenagers in the 80's like me still remember them,
because I still do!
Do You?

Comment by JoAnn on March 31, 2009 at 3:55am
"Hungry Like the Wolf" was one of my favorite videos. Remember when MTV used to actually play music videos. Those were the good old days :-)

fwiw, I'm still a poor girl but Joan Jett at 50's got nothin' on that.

Must be I read the same Rolling Stone article-lol.

And how come Styler never gets the credit is what I wanna know!