Lust for Evil from Geoffo on Vimeo.

The Footage is from the movie "Purple Noon" and the music is Iggy Pop's "Lust for Life".

Do you control the shapes of the green key, or whatever it's called?   Or is it somewhat random?

Syd, I created the green screen footage earlier and for a different project. This is an experiment, in that I'm trying to roll with what comes up, but I did make a lot of decisions. In the beginning, the confrontation on the boat, I cut up the entire sequence and then moved all of the footage with Philip (the victim) facing the camera to one track and Tom (the killer) to another. I kept neutral and important expository footage on a third track. Then I deleted everything I could while retaining (I hoped) enough to keep the story intelligible.

Then I chose six of the eight tracks, combined them with identical greenscreen footage and keyed out the white and output six separate files. What I had at that point were movie files with rectangles swimming around them. Then I composited those six second-generation files--keying out the green--against the original untouched footage. I think I generated twelve different versions of that minute and ten seconds. For example, Black and White Full Screen Tom over Color WideScreen Philip; Color Widescreen Tom over Black and White Full Screen Tom. Then I picked the one of the dozen completed tracks that seemed to tell the story reasonably well and laid it down in a new sequence. I had tried to arrange everything so I got lots of confrontational compositions to begin with--meaning I knew that at a given frame I knew I had a snarling Philip on one track and a smiling Tom on the other--but I didn't bother to check against the green screen. I had no idea until I generated the tracks how much of the first track would be visible in the frame.

These frames are right next to each other. I basically could cut anywhere I wanted and know I had eleven perfectly matched alternates. I definitely didn't look at all the possibilities. I just chose the first thing that looked good. At some points I was emphasizing the narrative at others I was looking for tension and in still other spots I just wanted the best looking series of frames. 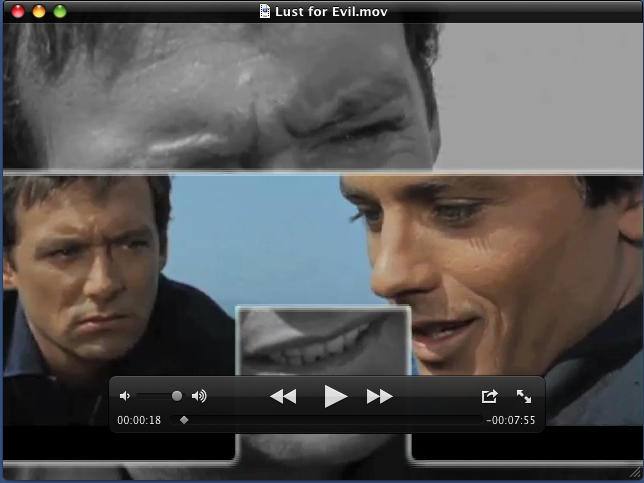 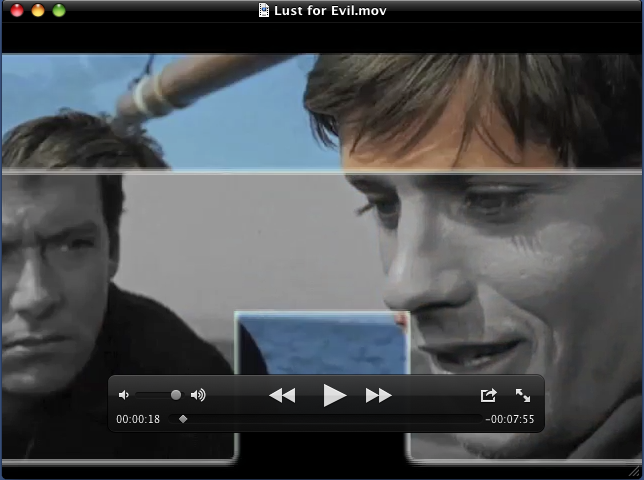 Thanks, Jim! I've been playing with it for some time now. I give myself little rules to follow--without limits I turn into much--and see what I can come up with.

This is a different expression of the same technique. Since the drawings are my own I can shape the greenscreen track directly to the footage.

Wallpaper for Paranoids from Geoffo on Vimeo.

I meant to say "without limits I turn into mush"!

Loving it. All kinds of beautiful stuff here and for me the color effect with your awesome sliding effect adds a dark side/ light side thing that fits so perfectly with the seemingly empathic but actually cold as steel theme.