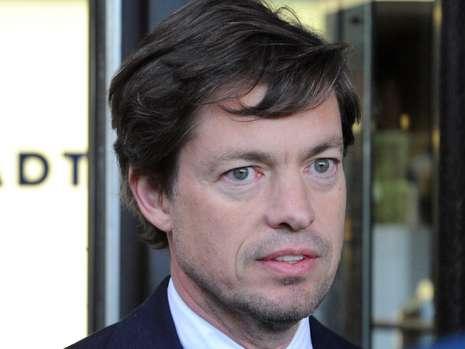 His father flew Germany in 1936 and founded the Heinz Berggruen museum in Berlin in 1996.

Nicolas Berggruen made circa 2 billion EUR with his investments (Hedge funds, Real Estate and other firms) after studying finance in New York.

Now he bought Karstadt (famous German grand magasin/ large store) to rescue it from insolvency via restructuring and in order to save 25.000 jobs.

As a German-American Jew he is also investing in architectural projects in Berlin and Tel Aviv. As the son of a famous art dealer and collector he owns of course artworks of Damien Hurst, Andy Warhol and Jeff Koons.

People are gossiping that he is the great womanizer because as an 49 year old ultra rich heterosexual he is still unmarried. I think he is not the character for the Casanova game. Probably he doesn’t have the time to live a marriage and is too serious to marry a “trophy-wife”.

He doesn't own a home nor a car (thus living in hotels). He said: “...for me, possessing things is not that interesting. Living in a grand environment to show myself and others that I have wealth has zero appeal. Whatever I own is temporary, since we’re only here for a short period of time. It’s what we do and produce; it’s our actions that will last forever. That’s real value." *

I was thinking on the way home yesterday that I was going to give more away this week to the salvation army. I tend to try to purge much... lately I am at that stage where I have realized that none of this stuff matters that much. I hold on to things that have been passed down, or I tell myself I will use one day as it takes up space and I have not touched it in five years... well no more.

people have been brought up to horde such useless things, junk, thats all it really is...

this time I am really cleaning house.

Comment by Geoff on September 5, 2010 at 11:08am
The social function of an investment banker is to manage risk and to direct capital where it can be deployed most productively. Of course an i-banker doesn't necessarily consider these goals consciously, he may simply pursue a large income.

When Berggruen rescued that department store chain (acting directly, as opposed to financing the deal) wasn't he acting more as a businessman or an entrepreneur than as an investment banker?

There is something fascinating about people who have a knack for money. Unlike many (Cornelius Vanderbilt, Alfred Krupp, Nathan Rothschild) Berggruen sounds emotionally healthy and not twisted or peculiarly limited.

Comment by Holger on September 5, 2010 at 12:27pm
Correct Geoff, in the Karstadt-deal he isn't acting as an investment-banker. I am deliberately streching the description of "investment-banker" because of the current image of that group.

In New York he founded a hedge fund, that was the typical step of an investmentbanker. And he was acquring deposits of wealthy clients for that fund back then. Now he is pursuing his personal goal of ultimate freedom as independent investor.

For him it's only a small deal but for the Karstadt employees a great hope and for Berlin and Tel Aviv beneficial investments.

Apart from that it's an act of social responsable investment (lately he also donated 250.000 USD for prop 23/greenhouse gas in California). The business task itself if very difficult because large deparment stores are not "in" anymore in Germany (exept the KADEWE in Berlin/biggest Karstadt store).

Comment by BlancheNoE on September 6, 2010 at 1:47pm
First off, I gotta' tell ya', if you want views you should NOT use the word 'educational' in your title. That shite might play well with those Eurasion types but this here's aMERica Buddy (F*ck Yeah). Second off, I sincerely hope that Mr. Berggruen is the real deal. I hate it that I am so skeptical when it comes to charitable entrepreneurs. I believe it stems from the fact that all the corporations in the news for trashing the environment or stomping on our constitution are the same corporations who are constantly on display (in commercials) as contributors for our Public Broadcasting Service. The donation from Mr. Burggruen to prop. 23 does make me lean towards his court. I have always said that ultimately, I don't really care if the crooks who run the old energy industry are the same ones to run the new, just GET ON it,...like now.
Great blog.

I agree with you as so far, that the charitable entrepreneurs like Warren Buffet and Bill Gates mainly do it to reduce their taxes. I don't really like that. As European I prefer the distribution via the state, not the choice of one individual about whom to support.

Berggruen seems to be a very different type. He appears like some kind of idealist and real world-citizen with money. But how exactely he made his first millions is not disclosed right now unfortunately.

Thanks for reading, Blanche :)