Jack Layton was the Leader of the Opposition in Parliament and head of the New Democratic Party in Canada. Pictured above with his wife Olivia Chow, also a Member of Parliament.

I didn't always agree with your politics, but your love for your family, devotion to this country, and contribution to making it a better place for all Canadians, are very much respected. Damn, we're going to miss you Jack!

Closing from his last letter to all Canadians, dated Saturday, August 20, 2011:

All my very best,
Jack Layton"

Everywhere you go in Canada, people are feeling the loss of Jack Layton. And for the last few generations who have grown up with sidewalk chalk, it has become the medium of expression...

The following are some of my favorite pictures that have been posted online.

Jack used to cycle to work: 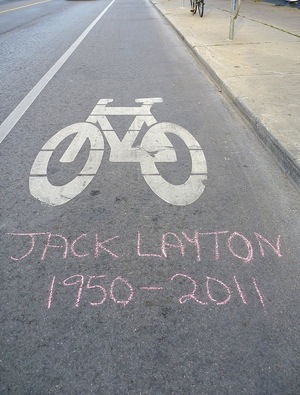 Impromptu memorial to Jack at Nathans Phillips Square in Toronto where he started in life in politics as a member of the Toronto City Council: You've done a beautiful job of showing how special the man was and is.

I wish I knew him and I wish I could hug ya' right now.

I'm sorry for your loss yet glad for the memories you must have of him.

Bless you, bless Jack and his family and bless Canada.

I know how personal the loss can feel with the demise of a public figure you admired. My condolences to you and all Canadians who loved Jack. I watched the YouTube video and read up a little on him. He was not only a champion of the environment, but also of marriage equality (thank you, Jack!). And hey, I admire almost any politician, even the ones who don't reflect my politics, for having a sense of humor and fun: 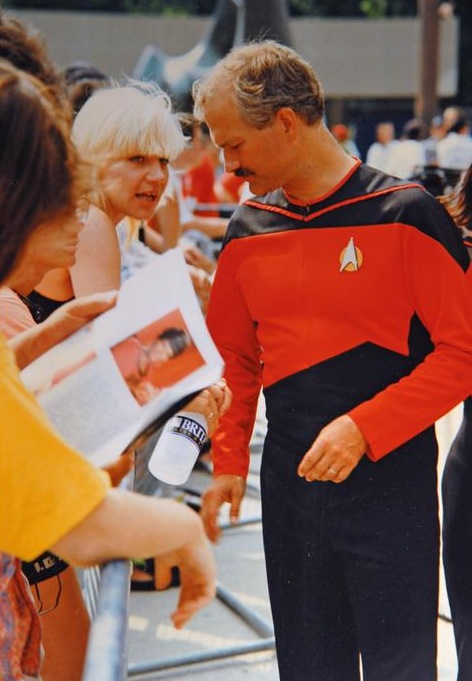 @BlancheNoE Thanks. He was a decent guy who worked hard to find common ground between people.

@NatureJunkie Jack fought for the rights of ~all~ Canadians. He gave a voice to people and issues decades before anyone else: the LGBT community, residential school survivors, violence against women, the homeless, the environment, etc... and never compromised those views for politics, but worked across party lines to get things done.

Jack was able to find humour in most everything, starting with himself... He had an easy going style and even managed to get our hard boiled press to join in for sing alongs on the campaign trail. Jack and Olivia were a real part of the community they lived in.

"Canadians from all walks of life are pouring out their feelings of loss at the death of Jack Layton: online, in books of condolence, on pieces of cardboard stuck to walls and at makeshift memorials, including one at Layton’s Toronto home."

"Because Layton refused to stoop to attack ads and negative politicking, people felt he understood them in a way other party leaders might not. His civility allowed them to come forward knowing they would get a fair hearing."

"In a political era marked by cynicism and negativity, Layton presented a sunnier, more inspiring kind of leadership. Voters felt he believed in this country’s ability to produce and share great wealth and that he understood that all citizens need to feel welcomed and respected by their political leaders.

This is a far cry from the very uncivil political discourse that is driving Americans apart and threatening to become a feature of Canadian political life. Nasty, personalized attack ads are not what Canadians want. That is the message behind the outpouring of grief at Layton’s death.

He was a charming, charismatic man who wore his heart on his sleeve, but that is not the only reason Canadians mourn him today. He stood up for what he believed in, and he did it forcefully – but also respectfully. Voters did not have to agree with his policies to feel that he respected them and would represent them to the best of his ability.

Political leaders, both current and future, could learn from Canadians’ reaction to Layton’s death. Canadians are showing that they want their political leaders to behave in a way that serves them, not waste Parliament’s time with mean-minded exchanges. They are mourning Jack Layton because they saw in him a man who strove to bring out the best in all the men and women who represent them. He gave politics and public service a good name."

Our Canadian representatives need to look closely at our collective reaction to Jack's death and start engaging in more respectful and productive debate. We are not lemmings fueled by the media, politics, celebrity, or the internet. I resent and reject that characterization.

Who else could have inspired this: The photo above brought tears to my eyes, and I got choked up describing it to my co-workers. I haven't seen an outpouring of grief and affection like this for a politician since the candlelight march down Market Street for Harvey Milk in 1978. This one photo tells me just about everything I need to know about Jack Layton.

Comment by Pypermarru1 on August 26, 2011 at 6:05pm
I heard about this.  Horrible news.  He was big time in Canada. What a patriot.  I've been told that Jack was higly Charismatic in the most geniune way.  Cheers to Jack