Earth 'in the crosshairs' of a solar explosion

"There is no means of avoiding a final collapse of a boom brought about by credit expansion. The alternative is only whether the crisis should come sooner as a result of a voluntary abandonment of further credit expansion, or later as a final and total catastrophe of the currency system involved." -Ludwig Von Mises 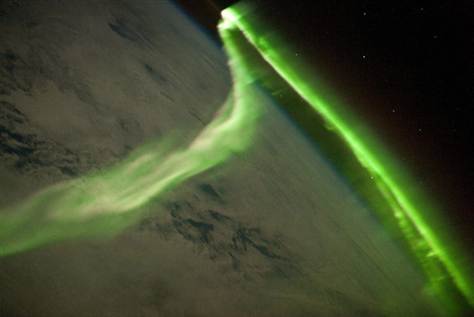 A powerful solar flare, hurled into space when superhot gases erupted on the sun Sunday, might cause a display of the aurora borealis for parts of the northern United States overnight Monday night.

The sun unleashed the solar flare yesterday at about 12:30 p.m. EST from a sunspot region that was barely visible last week. Since then, it has grown in size to more than 62,000 miles across — nearly eight times the width of our Earth.

The flare was categorized by the NOAA Space Weather Prediction Center in Colorado as a Class M6.6 and is the strongest solar flare observed in 2011. It could ramp up northern lights displays for skywatchers living in northern latitudes and graced with clear skies.

Such a flare, covering more than 1 billion square miles of the sun's surface (called the photosphere), was described as "moderate" in intensity. Class M flares are stronger than the weakest category (Class C). They are second only to the most intense Class X solar flares, which can cause disruptions to satellites and communications systems and pose a hazard to astronauts in space.

NOAA's Prediction Center has forecast the possibility of additional solar flares from the same sunspot region over the next two or three days.

Sun flares are gas pains Solar flares appear to be caused by a sudden release of magnetic energy. The flare itself occurs in the solar atmosphere, generating a brilliant emission of visible light, as well as ultraviolet waves and powerful X-rays.

With major flares there is a disruption of radio communications shortly after the eruption. Indeed, Sunday's eruption produced a loud blast of radio waves that was heard in shortwave receivers around the dayside of our planet.

Earth in the crosshairs However, Sunday's solar flare occurred near the middle of the sun's disk, meaning that the resultant explosion of electrified particles could be "geoeffective," that is, directed toward the Earth.

So, in essence, our planet was "in the crosshairs" of this solar explosion and would thus increase the chance that an auroral display might result. Ideally, the associated stream of particles could reach the Earth 37 hours after the flare's eruption.

That would correspond Tuesday, Feb. 15, at about 1:30 a.m. EST. But this is only an approximation; the actual commencement of a possible magnetic storm could occur many hours earlier or later, so it would be best to check the sky periodically during the overnight hours to assess if any activity is actually taking place.

The prospective zone of visibility can include the northern Rockies, northern Plains, the Great Lakes, northern portions of Pennsylvania and New Jersey as well as all of New York State and New England.

However, if the stream of electrified particles turns out to be less energetic, aurora visibility might be confined to places farther to the north, and nearer to the Canadian border.  Conversely, if the particle stream turns out to be stronger than forecast, an aurora might sighted farther south into the central U.S.

Those wanting to try to see any auroral activity should find a dark location with a flat northern horizon and look north. Look for greenish or reddish glows or streamers.

A dark sky also helps. Unfortunately, the moon is currently in a waxing gibbous phase and pretty much will light up the sky until it sets around 4:30 a.m. EST tomorrow. The sky will be darker after the moon sets, making it easier to observe whatever northern lights might be visible.

Joe Rao serves as an instructor and guest lecturer at New York's Hayden Planetarium. He writes about astronomy for The New York Times and other publications, and he is also an on-camera meteorologist for News 12 Westchester, New York.

Comment by BlancheNoE on February 24, 2011 at 9:46pm
We missed this (sideways frowny here).
Have you seen any pics or footage of the most recent one?
I'm gonna' go check.
Thanks Michael. Cool.