About two and a half years ago, one month after I adopted my foster dog Buddy, I took him to a “Sheltie-Palooza” over a 4th of July weekend. The idea was to bring all these dogs of a high-strung breed to the outskirts of the city where they would not be bombarded with firecracker noise. I met a beautiful dog there that I learned was somebody’s hospice foster.  “Cancer,” his foster mother told me. “The remainder of his days are going to be filled with love, wonderful walks, toys, and Häagen-Dazs.”

It made sense to me. Eskimo Pies or Häagen-Dazs. Surely either one makes the sunset easier.

Buddy was ten when I adopted him. Being that he was already an old man when he came to me, I knew our years together would be few. But I was all in with this old guy. Buddy is a soul-mate dog for me. One of those human-animal bonds that transcend whatever passes for profound. Yesterday morning I was told by Buddy’s doctor that he has lymphoma. She tried to comfort me with talk of treatment and remission. “Six weeks to 14 months, depending on his cell type and the treatment we pursue,” she told me.

After speaking with her, I took Buddy for a long walk in a special neighborhood—the neighborhood where he spent his life with his previous owner before I adopted him. His owner was an elderly woman who died in her home. When the authorities did a welfare check on her, they found Buddy by her side. I doubted that he ever got a chance to say his farewell to his old neighborhood. I wanted to give him the chance.

Every thought of Buddy brings a twist to my stomach and I have to ask myself, would I prefer not to know that his time is so short? If I could choose, would I prefer that he be taken from me suddenly so that I would not have to suffer my grief for so long before I have to?

Last night as I held him tight to me before falling asleep, I checked his lumps. They have grown since Thursday morning. I know what Chig went through with Kirby. I know my time with Buddy from here on out will be short and then a lot of time after that is going to be excruciating.

But I think of the second dinner I gave him tonight, the bowl of Häagen-Dazs. I have this enormous luxury of our days ahead, of not wasting them, of taking him to his favorite places and feeding him to the gills with cheese and peanut butter and ice cream, and I know that he is fortunate that I know. A gift for both of us. 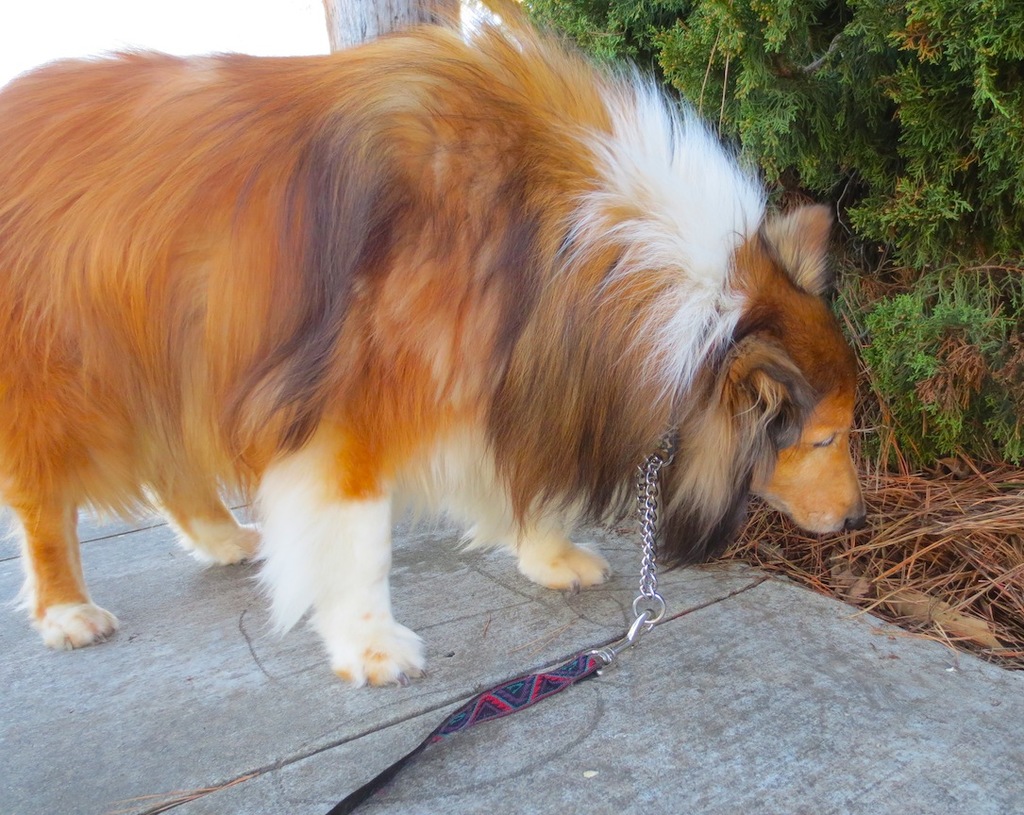 Beautiful dog, Beautiful dog-momma. Glad I got to brush paws with him and I'm blessed to know his second momma.

Thank you, Amy. I'm blessed to know you, too. It's a sweet thing that Buddy has been able to meet a few of my friends from VH and the Ark. I kinda think he helps me make a better impression on folks than I'm capable of doing by myself.

NJ....    We cured Woody of B cell  Lymphoma but he was taken down by thryroid cancer. (about a year after diagnosis.)  Do you know if it is B cell or Tcell?   There is an immunotherapy for Bcell that is a 50/50 shot at cure... You will still have to do chemo as well. Hello Chig. I still don't know yet what cell type Buddy has. It was 7 to 9 business days to get the lab results, and it was slowed by the President's Day holiday. I'm hoping to find out tomorrow. I do know that he has cutaneous lymphoma--his tumors are just under the skin in three locations. But if it turns out to be B-Cell, I will look into immunotherapy. I'm so sorry you lost Woody. You and Dog Mom have lost a lot of good dog friends in recent years.

Steve, thank you for the kind thoughts. Buddy is a good-lookin' fella. Even two weeks after his diagnosis, you wouldn't know by looking at him that he's sick.