While I had been laying next to Ruby and asking questions I knew she could not hear much less understand, such as “Is there someone you are missing right now?” or “Are you happy here?”, Ann had set upon the task to fuel and build up the stamina of this little dog who showed all the physical signs of living through some very hard times in recent days. She looked like a puppy and at times she moved like a puppy, but when you touched her it was not hard to imagine her skeletal frame as it was thinly veiled by a tight layer of skin with little muscle and a short coat of fur. At seventeen pounds she was not difficult to carry if she expended much of her energy before finishing a walk. The walks started out down the driveway and a hundred yards up the road and back. What Ruby lacked in staying power/endurance she more than made up in lack of direction. Obviously Ann had more than one obstacle to overcome in walking this little old lady. Ruby had no concept of being walked on a leash. She bounded out the door and down the driveway as if she was a thoroughbred leaving the gate at the Kentucky Derby. It was shocking to watch as instantly her whole demeanor changed from subdued and steady to bounding and chaotic. She walked in every imaginable direction almost certainly wrapping her leash around Ann’s legs. Our other dogs often walked three miles in the morning and sometimes again in the evening depending on how cool the night air. Obviously, these three mile jaunts would not be happening with Ruby in tow. At the same time, it was outwardly obvious that Ruby wanted more and more of this new experience as she grew stronger and stronger.

Ann started by walking Ruby with Soph, who from the day we first met Soph acted like a grumpy old lady herself. We really are not sure of Soph’s age other than her body is much younger than her attitude. Not long after practicing with Soph, Ruby was walking with all of us on a 1.2 mile course around the neighborhood. Less and less she needed to be carried part of the distance.

Kirb would on occasion strain his shoulder and I ended up pushing him while we walked in a large stroller until his shoulder healed. The stroller itself has plenty of room to move in, four wheels and mesh screen on to the front top and right and left sides. As it turns out, as Ruby was starting her one mile walks, Kirb was once again being pushed in the stroller after straining his shoulder on a walk. I often left the top flap unzipped so Kirby could stick his head out the top and watch the scenery as he cruised behind the other dogs. Ruby was more than happy to join Kirb in the stroller when she grew tired. Kirb was not impressed with having to watch his his movements or steps inside the mesh cage. Kirb put up with this for about a week giving me dirty looks as I loaded his stroller mate. Honestly, as happy as Ruby was to go into the stroller, as she grew stronger I could tell it was less and less fun for her as well. After a week of this Kirb chose to announce his shoulder was better by leaping what seemed three feet in the air through the top flap and made a perfect four point landing in front of the stroller without disturbing Ruby inside the stroller. Soon after the stroller stayed home. Ruby had learned to conserve her energy for the entire walk. She began to pull toward garbage cans, sniff around trees and bushes and kick rocks behind her like her larger siblings. We may not have been going the usual three mile course, but all the dogs were grateful for their walks, and Ruby was holding her own, with only the occasional need to stop and rest.


Ann fed Ruby the same size helping of food as the larger dogs in the house, and including senior canine vitamins as well as Glucosomine and Chondroiton for the joints, which she includes for all of our dogs. Ruby was putting on weight gradually. We decided to put Ruby’s rood bowl in a room down the hall and elevate it from the floor so she did not try to choke the food down so fast (in case she was worried the other dogs try for her food if she was not fast enough. They would not do that to her, but who could really tell what was in her mind?) and she seemed to cough less after eating if the bowl was elevated to the point she did not need to dip down to eat. Everyday we made a trek from the kitchen down a narrow hall to the end of the house with a little mop dog dancing and panting and circling around our legs while she stared intensely at the bowl in our hands.

Ann trimmed Ruby’s fur and after every fur cut Ruby seemed to perk up. One particular trim job earned her the a very un-PC name of “Chemo puppy” for a day or two as her fur was so uneven. Ruby must have loved how cool it felt to have the fur removed. So as ridiculous as she looked she acted as if she felt grateful nonetheless. The neck collar was replaced by a body harness for her walks. For a month or so she was doing great, eating great, showing signs of being interested in the other dogs and if it was not for the bad haircut, she was looking great. The coughing continued throughout and soon we began to worry if she was putting on too much weight We made an appointment with the Veterinarian to have the cough, her heart, her lungs, her blood and our growing concerns looked into, as her coughing became more frequent and she was showing signs of slowing down.


Ruby on January 26th walking on a leash for the second time. 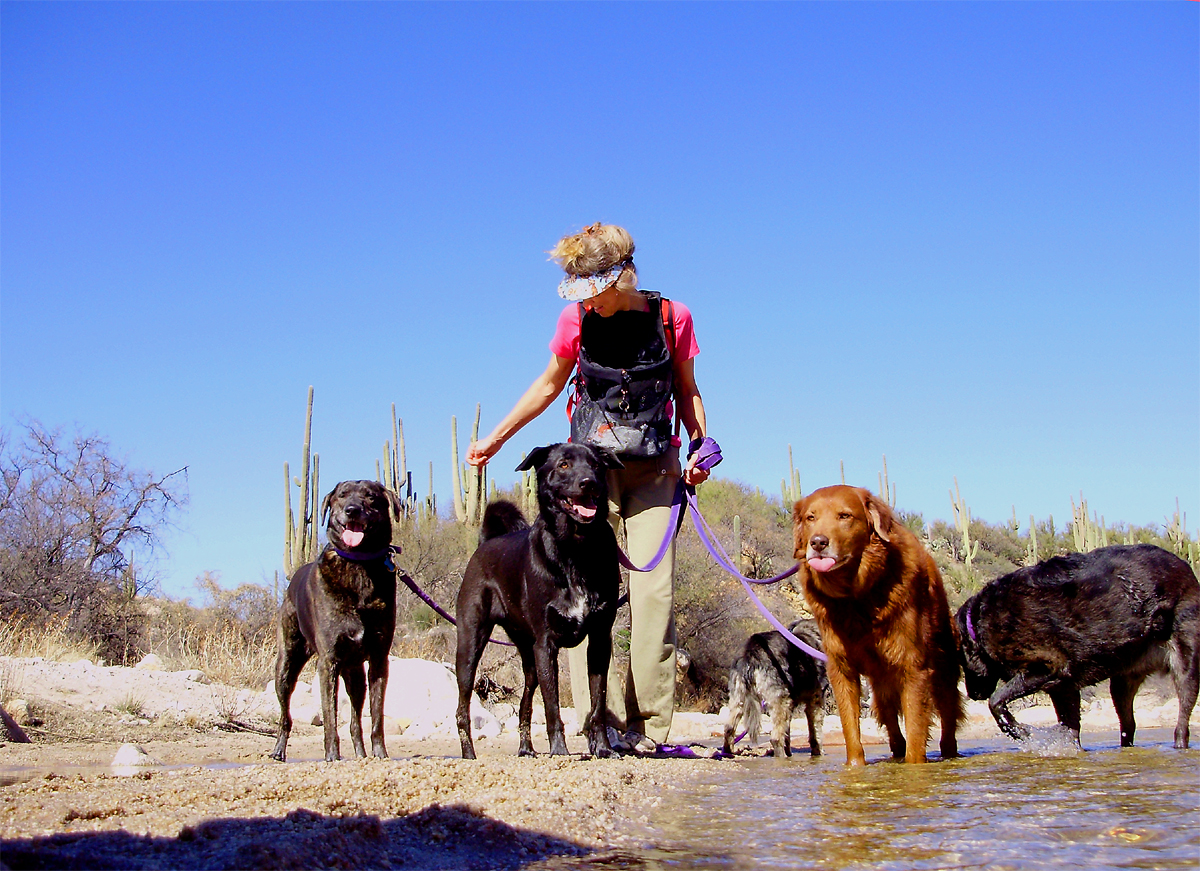 Kirby shows how excited he is to have Ruby in tow during a hike. Ruby shows her wonderful sense of direction. Soph is after a rock in the water.

Comment by JustAnotherUserName on September 5, 2009 at 4:23pm
That photo is priceless!!

Comment by Chig on September 5, 2009 at 8:51pm
Argh.... I am going to have to get to the difficult part of the the story. I may see if I can get an Xray to add as a visual (that is my excuse for dragging a bit on this.)
It is amazing that something so small, so quiet, and so shortly around leaves such a huge void. I have four wonderful dogs and the best wife. I am waking up more and more to that fact as each day since has passed.

Comment by Pypermarru1 on September 6, 2009 at 6:50pm
What a photo. All those dogs are adorable. I am really enjoying this story chig, makes me feel a personal connection with Ruby. I'm afraid these blogs are going to make the end harder for me to bare...if that makes sense. I know whats coming but still.....

Your wife is like a well oiled machine of dog walking....shit she looks professional, right down to the killer dog walking arm muscles.

Comment by NatureJunkie on September 8, 2009 at 12:41am
There is nothing that makes me so happy as walking in the company of a dog. How I envy you and Ann--having all that company to walk in. After seeing the video of Ruby on her second walk, I'm absolutely certain that you and Ann filled her days with real comfort and happiness. I hope that knowing that will help to fill some of that void for you, Chig.