But probably eighty percent of the material pertained to Gary's other great-grandparents, a prominent and historically important family in Silicon Valley. These were people I did not know and was not related to and who have no living descendants, and now I am the possessor and custodian of their history on paper.

There is a mansion in Santa Clara, a local historic landmark, that was built by this family. I contacted the current owner to find out if he would be interested in having these photos and documents that belonged to the house's original owners. He just about did a back-flip of joy to hear from me. He and his partner have owned the house for 30 years and they have been doing everything they can to restore the house to its original character, to the extent that they have even tracked down the original furniture that was auctioned off long ago and re-bought it all, piece by piece.

Lou, the current owner, asked me if there were any photos of the house's interior among the family pictures in my possession. I told him no, that in the days of the family's occupancy, indoor photography was difficult by non-professionals due to the low light sensitivity of film. He was very disappointed, as he was hoping to find clues about how the interior was once decorated and arranged.

In preparation for transferring ownership of the photos and documents to Lou, I have taken on the laborious project of making high-resolution scans of all of it, both for my own records and for the history society of Santa Clara. I've had the opportunity to stare at each and every photo for a long time. Every time I look at a photo, I usually notice some detail about it that I missed on previous examinations. It was one such detail that made me realize that I did indeed have a photo of the historic house's interior. 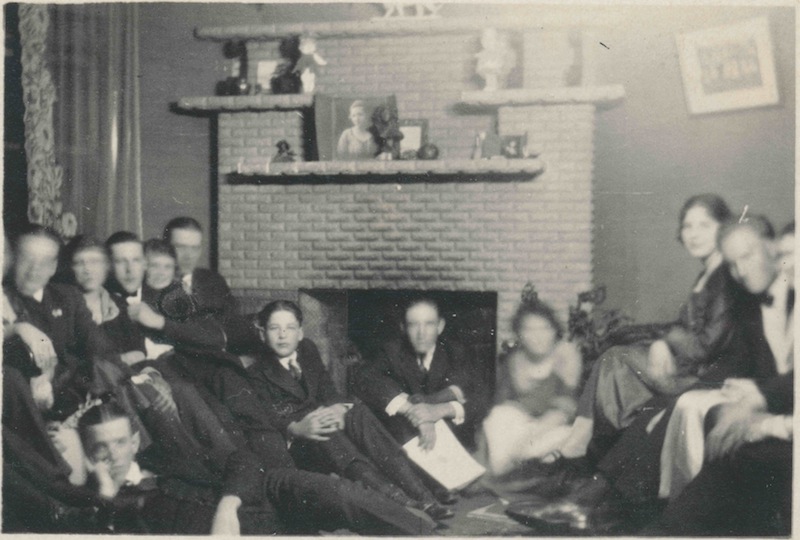 This photo was taken either in the late teens or early nineteen-twenties. Everything in it is blurry or out of focus due to the long shutter speed that would have been required to get a good exposure indoors in the evening. So how can I tell anything from it? The answer is a small item on the mantel that I recognize despite its blurriness. 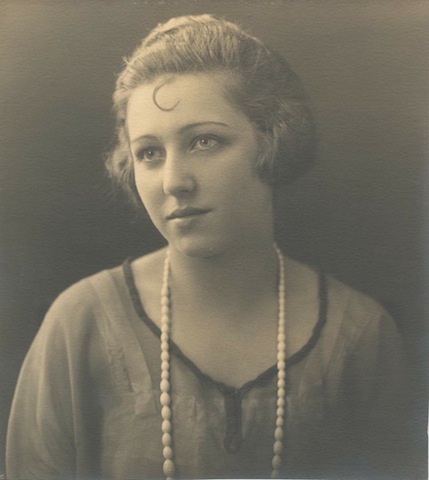 It is this portrait of Gary's grandmother, Delilah, the woman who married my great-uncle. They married in 1922. I not only recognize this photo on the mantel, but I have looked at enough photos of Delilah at this point that I also recognize her blurry face in the group. But not my uncle's face, and that tells me this was pre-1922.

I emailed both of these photos to Lou. "Do you recognize this fireplace?" I asked him. "Yes! That's our living room," was his reply, "but I don't recognize a single face in that photo."

I look at the photo again of these long-dead anonymous people as they were some ninety years ago, and I wonder how it is that so much personal history, buried with the memories of the people who lived it, can end up in the hands of someone like me, so disconnected to it except through fascination, and maybe something else that resembles longing. But a longing for what, I may never understand.

Ah... personal history. Such a mixed bag of reactions from me. I don't get the interest in genealogy, but yet I am glad to know part of me came to Canada during the seigneury system in the mid 1600s, part was run out of Scotland for sheep stealing (1800s), immigrated before the potato famine (1700s), and settled here to get free land in the New World (1800-1900s), and the men who came before me on both sides married women from our First Nation.

Beyond the wide sweep of my family history, the specifics are meaningless to me beyond the oral history and documentation of those people who I have concretely known, touched, and loved in my life.

As such (and having been the executor of numerous estates), I shred a great deal and am very cognizant of what is left behind. For myself, I wish to remain unknown beyond the legacy of my sons.

*snort* I have no idea what this response reveals. But sincerely, I would rather be forgotten to history than to be remembered in a way I don't like or to be misunderstood.

Ohwhatthefuck! *chuckles* I am so seriously driven to remove this comment, but for once will let it stand.

@ Marie: I have always been interested in what I would call the small histories of ordinary people, but not particularly in family history until a couple of years ago when a distant relative gave me a photo album that my grandmother assembled when she was in high school. It hit me like a sledge hammer when I realized that I although I loved my grandmother in a deep way, I really didn't know her in a deep way. I set out to find out everything I could about her life, especially her life before I came into it. And all I have so far is an assemblage of facts that leave me to fill in the blanks with assumptions.

"For myself, I wish to remain unknown beyond the legacy of my sons... I would rather be forgotten to history than to be remembered in a way I don't like or to be misunderstood." You have me wondering if perhaps my grandmother felt the same way. She rarely talked about her past with me and managed to leave this life with scant information about herself behind.

But Meryl Streep said something on "Faces of America" that made me realize why knowing the history of my family members has become important to me. She said, "We are nothing but them [our ancestors]... I think we are the sum of all of the people that have lived before us." So for those family members who tried to erase their tracks before their departure, I may be doing them an injustice, but I can't help wanting to understand their part in the sum that is me.

@ steve&b: Thank you for reading. It has been very interesting to come into possession of these boxes, for all kinds of reasons, one being just to see the weird kinds of things a family chooses to save and preserve.

Comment by Dana (scribblers sanctuary) on December 11, 2012 at 3:07am
My mother and my in laws are all deep, deep, deep into genealogy. Even though history is one of my favorite subjects, I have not joined them in their enthusiasm for the research, but I love the stories and discussions. The photos intrigue me the most. Lovely blog sweet friend.

Dana, I have a sister and several cousins who feel like you do--not interested in doing the research, but they love the stories that come out of it. That's just fine with me, because I love doing research, and I love being the storyteller. Thanks for reading.

@steve&b You are a very nice man and I don't think you have an offensive remark in you. *chuckles* Some of my reactions and comments do tend to go off topic...

@NJ My husband's family is really into genealogy. Also, they are just like Lou and his partner, not just about the family home, but about everything in it and the family relics. I drive them nuts. =-)

@steve&b: What Marie said. It isn't in your character to be offensive. That is an amazing picture of your grandmother. So much detail in that photo about her, right down to her shoes. Is it on Kodachrome? My family has a lot of color photos from the 50s too, all on slides. Slide shows were the poor man's home movies.

@Marie: I saw an episode of History Detectives where they interviewed a woman in Virginia who was the keeper of her family's genealogy. She lived in a southern mansion that her family had been living in for generations, and the thing was like a private museum of her family history (photos, furniture, relics, etc). I like thinking about the lives of people who lived in the past, but I would never want my home, my personal refuge to be a memorial/monument that way. It was cloying. You say you drive them nuts? I bet it's the reverse. ; )

@steve&b The rarest picture of all in family. The only picture of my paternal grandfather under the age of 60: I love all these vintage photos. I'm the genealogist of the family and the endeavor has given me a sense of rootedness in history.  And I agree with Streep.  Considering all I know about my ancestors, it appears the same stories play themselves out from one generation to the next.

Thanks for sharing this, NJ.  It always seems like there's one person in every family who serves as historian.  It's cool you're taking the time to digitally preserve the past you've been charged with because it'll make it that much easier for the next generation to keep it going.

@ Syd: It's cool to be the family historian, ain't it? I've been doing an informal survey, asking people wherever a conversations starts to lag, "Do you happen to know the names of your great-grandparents?" With the exception of only three people I've asked, the answer has consistently been no. But it seems like just asking them stimulates their curiosity. Several times now the next time I saw one of those people, they said, "Hey, you asked about my great-grandparents, and ya know what..." It's very cool.

About your banana box---man, I feel your pain. I've thrown away so many letters that I'd give anything to have back now. But on the bright side, unless you burned em', maybe some nosey-nose out there like me will find them and trace them back to you. It could happen.