What I saw from my office window today

It's been a long time since grade school, when our principal would haul the school's only television set into the cafeteria and call an assembly so that we could watch the Apollo astronauts. Nothing since then regarding the space program has elicited the same level of excitement, thrill even, I used to feel at being a witness to history.

But I felt a little tiny bit of it again today when the Space Shuttle Endeavor buzzed the Bay Area at 500 feet. The way one of my co-workers squealed and frantically tore a viewing space through the blinds, you would think the Beatles had arrived from London. Maybe in a way it was sort of like that.

It may be only a machine, but it's still a celebrity. 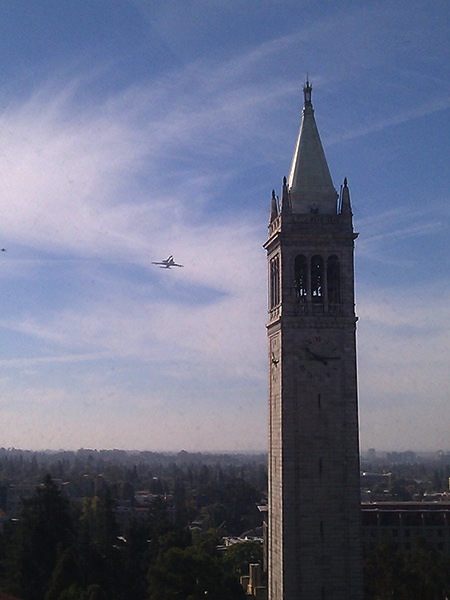 (This is not my photo. It was taken by a colleague.)

LUCKY!!!!!!    They actually buzzed right over my workplace yesterday.  (Captain Mark Kelley fed them coordinates and had it fly low /  circle over the neighborhood where we work while he and Gabby watched it.)   I was so busy, by the time I got out of the building I missed the whole thing.  Every one there said it was close and huge.

Chig, bummer! Your co-workers were right - it was close and HUGE. When it flew over the clock tower there, it seemed like it was only fifty feet above it, but I know it couldn't have been that close. It was also accompanied by a military jet, which you can barely see as a dot on the left border of this photo. The roar of that jet sounded like God was coming. I'm sorry you missed it, but I'm glad Gabby got to catch it. She deserves the special treatment.

LOL.  I went to my Mom'sthis weekend. She said  she was in the Arizona room of her house painting and heard big noise.  When she looked out her window they were flying directly over her neighbors house.  They approached the city over  the Rincon mountains by her house.  She said it was so low that she thought it was going to land on the street.   She is convinced that she had the best view in Tucson of this thing.

It flew down the coast so a few friends and I went to the bluffs above Mailbu...I can't even describe how awesome it was to see it in person rather than on TV!  And from such a spectacular vantage point, too.  Then they went in and flew around the Hollywood sign before landing at LAX.  Amazingness all around!

Ruth, it seems like everyone who saw it felt like they had a spectacular vantage point. It's just a big, awesome thing, hard not to be impressed by it.

I have to think that if only NASA had done a cross-country publicity flight with it back in the early nineties, the public would have been so razzed by the space program, we'd be on Mars by now!

Thanks for making me feel that. You really did. The closest I can think of is when I was about 7 years old and ran up to Clayton Road to watch the Olympic Torch go by. It was really far to run too, like, a TENTH of a MILE.

...can't believe I survived. I totally shoulda' entered the Olympics.