A friend asked me yesterday for a list of my favorite artists and songs, which sent me to my excessive CD collection with notebook in hand. After I filled two pages of tiny notes and was about to start a third, I realized how MUCH info it was, and it got me wondering if it wouldn’t be impossible to edit it down to what my very favorite of all these songs were. I’ve never tried to force this issue before. Never needed to.

I didn't know how to begin narrowing that down. What're the criteria? There are literally thousands of songs that would make me blurt, "Turn this up! I LOVE this song, it's one of my favorites!" Still, there are some songs I love (Stairway to Heaven, Hey Jude, What's Going On) that if I never hear them again in my life, it will be okay. Oh I'd miss them, but my soul wouldn’t starve without them.

What, then, are the songs that I will want to listen to always? I began a list of songs that I have never gotten tired of, even after listening to some of them for more than 30 years. The acid test for favorite-status is that I know I could hear each one of these songs every day for the rest of my life, and never tire of them.

This list is not necessarily in the order of how much I love each of these songs, with the exception of the first one. Clocks, written by Emmylou Harris, is one of the most beautiful songs (if not THE most beautiful) I've ever heard. I fell in love with Emmylou the first time I heard that incredible voice that is a cross between a cowgirl and an angel on what most of her fans still mistakenly believe was her first album, Pieces of the Sky. But when I learned soon afterwards that there was an even earlier album called Gliding Bird, I searched for it like Indiana Jones pursuing the Lost Ark.

It was a poorly recorded album of mostly mediocre songs, and poor Emmylou sounded more cowgirl than angel on it, and over the decades she has steadfastly refused to allow it to be reissued on CD. But Clocks—that was more than pure angel, it was pure heaven.

Yes, I know, I know—if you're a true blue Emmylou fan like I am, then you know that she included an alternate recording of Clocks on her Songbird box set. It's wonderful, but not the same. And so until I finally stop procrastinating and learn how to convert analog recordings to digital, I must keep my ancient turntable just so that I can have this song with me for the rest of my life. The necessity to keep obsolete audio equipment surely defines the difference between a song that inspires "Turn it up!" and one that qualifies as all-time favorite. 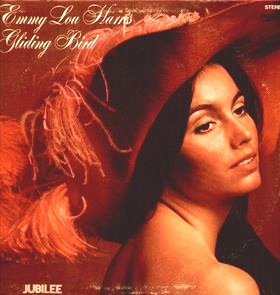 Comment by Pypermarru1 on November 11, 2009 at 6:48pm
The thought of making a list of FAVORITE music for life? Lord Woman, that is almost impossible, makes my head hurt. I suppose the Sundays would have to be on it, but I can't say beyond that. Jesus, it's like asking what I would eat for my last, final, this is it, never again, meal. Sheesh, it's just physically painful to ponder. Well, ok, cheese of some sort would have to be on melted on something.

Dang NJ, I think I gots me a list going....er...at least the making for a Friday night?

Comment by NatureJunkie on November 12, 2009 at 2:26pm
@ Pyper: It's a hard task, isn't it? Like trying to pick a particular M&M from the bag and claiming it's better than all the others. By the way, condemned prisoners don't seem to have a problem ordering their last meal. It always seems to be KFC and pizza.

@ Investy: Yup, You've Got a Friend is a standard for the ages.

@ Christine: I knew that if you responded to this, you were going to say Leonard Cohen. I just knew it. By the way, country was anti-cool in my young years too. Emmylou paired up with Bob Dylan in 1976 for his Desire album, and all of a sudden everyone I knew was listening to her, so I didn't have to hide her records anymore.

Comment by NatureJunkie on November 14, 2009 at 12:17pm
@ Suze: I think you have great taste in music and I would be very interested to see your Top-100 list. I'm guessing that Landslide would be on it. Emmylou does indeed have a very distinctive voice, and she's probably one of the most sought-after backup vocalists ever. I've never heard a recording that wasn't made better by the addition of her voice. When I someday get a digital copy of that original recording of Clocks, and I know I will, I'll share it with you.

Comment by flophousepoodle on November 22, 2009 at 12:42am
I'm with you on 2,000 miles and Suzie Q. Funny about the Hey Jude..I heard it the other day and it just goes on and on and on and on with the nanananananana..And I thought - 2009..Do we really need a full version on radio? Never heard clocks.
Kid Charlemagne by steely dan would be on my list.

Comment by Ash on January 27, 2010 at 10:06am
I would never be able to choose an ultimate favorite song of mine. You Can Close Your Eyes would be one of my top songs though. Mom would sing that song to me when she would tuck me in at night as a child or when I needed a little comfort. I have been brought up in a house with such a diverse range of music that I have sooooo many favs, I could never choose!

Comment by Geoff on August 29, 2010 at 9:12am
I wear songs out and have to put them aside before I can enjoy them again, but Lucinda Williams holds up pretty well after repeated listenings. It's tough to find stuff on YouTube because you either get poorly recorded live stuff (and a drunk Lucinda sometimes) or the uploaded studio cut with the album cover as a visual. This is a lame video, and maybe not my favorite song, but very catchy.

So I want something by Lucinda on my list, and something by The Kinks, probably something by Squeeze, something from Bowie ('The Man Who Sold the World'?), Graham Parker has been a favorite for 30 years, I can get tired of Booker T and the MGs but I always come back, I can't leave out Brian Eno without excising a big chunk of my youth, Roxy Music (naturally), maybe something from the first Crazy Horse album, gotta have The Jam, I've been thinking of editing together Uncle Tupelo's version of "I wanna be your dog" with the Stooges' original, so I guess I'll need both on that desert island if I'm gonna be making videos, 'Desperadoes under the Eaves' by Warren Zevon, 'Maria' by Townes Van Zandt is a new discovery, 'It isn't gonna be that way' by Steve Forbert and 'I ain't ever satisfied' by Steve Earle are necessary tinctures of soulful pessimism, something from Sam and Dave, 'Okie Dokie Stomp' by Gatemouth Brown, I'll have to think about Link Wray and Eddie Cochran, Roy Buchanon's version of 'After Hours' is nice but he's such a showoff, 'Wall of Death' by Richard and Linda Thompson (that's not her in the video--post breakup I guess). It just goes on and on, doesn't it?

Comment by NatureJunkie on September 1, 2010 at 5:52pm
@ Geoff: These artists you name would make a pretty good list. If my list included Lucinda Williams, it would be I Envy the Wind, a sweet, incredibly sensuous love song. Booker T and the MGs: hey, never once have I turned the station off Time is Tight.

I'm ashamed to say that I'm a newbie when it comes to Richard Thompson. I heard him rock the shit out of Black Crow on a televised Joni Mitchell tribute about ten years ago and I've been his fan ever since. Persuasion coulda made my list. But then something else would have to go. Sometimes I wish ten could be twenty.

Comment by Geoff on September 1, 2010 at 10:05pm
I would have a hard time picking a favorite Lucinda Williams song. Maybe it would be "Side of the Road", but "I Envy the Wind" is wonderful too. I'm pretty new to Richard Thompson as well (<10 years). Thanks for sending me off to find "Persuasion", which I'd never heard before.